Creightons of Finaghy, Balmoral and Black’s Road are a family business operating in the heart of the South Belfast area since 1936, when WG Creighton opened the famous Finaghy Garage. They offer an extensive and enticing range of convenient and deli foods – plus carwash and fuel services, not to mention recent additions like handy Post Office & Ticketmaster services too.  Creightons has been at the heart of the local community for the last 80 years. They have prided themselves on always going the extra mile for their customers and delivering exceptional quality, choice, value and service in everything they do.

The group is owned by popular and much experienced retailers Niall Creighton and Gail Boyd. 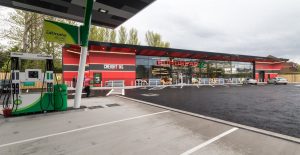 Andrew Porter, General Manager at Creightons, started working in Creightons Finaghy while on summer break from his degree in pure mathematics.  Now, over 25 years later, Andrew is one of the brains behind one of Northern Ireland’s best-known and most successful convenience retail groups.

“I have been in the Retail business for a long time, and have used several third party EPOS systems over the years, which were mainly unreliable.  EDGEPoS is the first system that is a ‘Retail’ system first, with Fuel integrated secondly.  EDGEPoS is a dramatic step forward and allows us to manage our whole business, including grocery and food to go.”

This is imperative as Creighton’s are famous for their deli and hot food to go facilities which have been incorporated into the stores.  In fact, customers come from far and wide for their breakfast, lunch and tea, including their Sunday dinners, all freshly prepared on site by their dedicated staff.

When we asked Andrew to tell us more on how he feels EDGEPoS has benefitted the stores, he told us,

“It’s the reliability of EDGEPoS that makes it unique.  With our old system, if one till crashed – all the tills crashed.  This meant that the queues were out the door waiting on the system to reboot.  That has never happened since we installed EDGEPoS.”

“If anybody out there is running a Fuel site, EDGEPoS is the way to go.  EDGEPoS is the easiest system that we have used for changing fuel prices.  When it comes to drive offs, we are able to use the enabler PC to see when the pump was authorised.  This pinpoints the exact time that the customer lifted the nozzle – and then we can go to the exact time on the CCTV.  It has made this process much more efficient and easier.”

“In general, EDGEPoS is extremely easy to use and the cashiers love it.  We have over 150 staff across the three stores, so the authority levels are crucial to our business.”

Andrew and the Creighton family were one of the first Henderson Group Retailers to adopt the EDGEPoS Head Office system.  Andrew tells us,

“Our Head Office system is based in Finaghy.  This means that one person can look at reports and do the sales reconciliations and check the end of day reports from one location.  All of our local credit accounts are on Head Office, so our customers can avail of their Account from any of our three sites.”

Being one of the most innovative retailers in Northern Ireland, Creightons is innovating using methods many class as outdated – building trust, focusing on community, finding their own solutions, and being prepared to take risks.  All of this, alongside their Butchery, Barista, Deli and much more makes them a firm favourite in winning these awards.  What a combination.  Andrew comments,

“This is true recognition for a fantastic group of hard working and dedicated employees. We are absolutely delighted to win these awards.”

And so you should be.  To top it off, this was the first time that a store from Northern Ireland won the award ‘Forecourt Convenience Retailer of the Year’.

Andrew has a great ethos in running his stores.

“We may indeed be excited about the future, but we have learned that it’s just as important to not lose sight of our past.”

When we asked Andrew if he would recommend EDGEPoS, he immediately told us,

“Wholeheartedly.  As a Retailer, EDGEPoS is efficient and easy to use.  It works well at every level and is 100% reliable.  No other system has come close to it.”

“When the BP card services integration is completed for the Self-Checkout tills, I will be looking at this option to add to Balmoral and Finaghy.”

We, here at Henderson Technology, are proud and privileged to be working with Andrew and the Creightons’ stores. 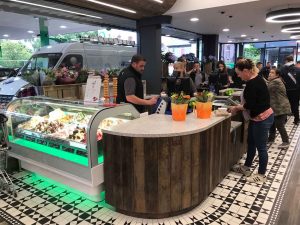