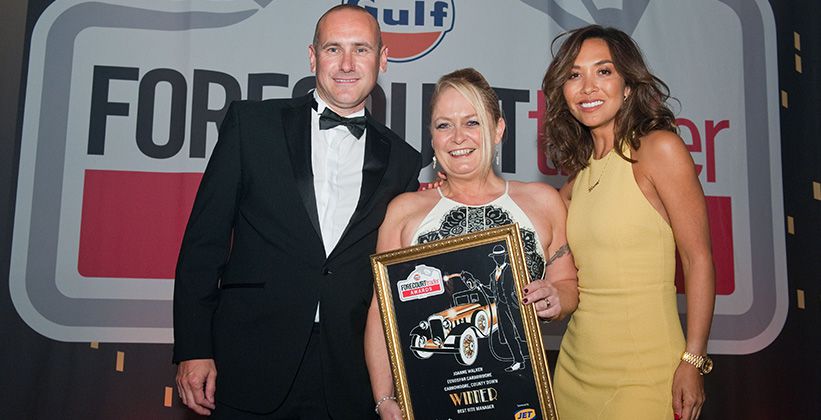 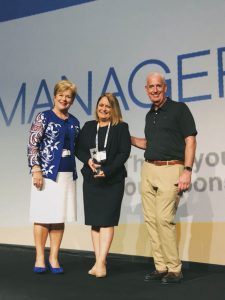 We spoke to Joanne Walker in 2017, after being announced as

Halfway down the beautiful Ards peninsula, there is a quiet retail revolution going on in Carrowdore – and Joanne Walker is at the centre of it.

Joanne, a highly experienced member of Henderson Group, was charged with rebranding the village’s existing Spar store to EUROSPAR. Not only that, she also had to oversee a £1.4million refurbishment that doubled the size of the store, introduced a Daily Deli and saw a staff increase of over 50%.

Was it successful? The answer is a resounding YES – a fact recognised by the industry at large when Joanne picked up the coveted title of Best Site Manager this year.

Joanne’s mission to transform the Carrowdore premises began some eighteen months ago and – despite her award-winning achievement – she is keen to put the success down to teamwork at all levels of the operation.

“In Carrowdore, we’re so lucky to have such a loyal, hard-working team,” she said. “They gave me great support during the 12 months of the refit. They had such positive attitudes throughout the work and they kept our customers very, very happy at all times.

“Then there was HQ as well. The Academy in Henderson Group and the Henderson Technology Trainers provided first class Training to all members of the team.”

Technology to the fore

As well as the people involved in the project, Joanne believes that new technology was key to the overall success of the expansion, especially in helping floor planning and merchandising.

“I am a big fan of our EDGEPoS technology. Throughout the changeover, it easily facilitated the increase in number of lanes and helped us maintain our low shrinkage. Indeed, our net profit was one of the best in Henderson Retail Stores in 2016,” said Joanne.

“For me, this system allows me to manage the store really efficiently. The system cuts out so much of the manual work out and slashes the hours spent in the back office. In fact, we couldn’t have won this award without the information it provided – from transaction journals, till scripts with CCTV, fuel reports and its stock-taking facility.

Joanne cites three key areas where EDGEPoS is making life a lot easier than the previous system she used: Overall Operational Efficiencies, the issue of Drive Offs, and improved results with Instore Coupons.

And the overall ease of integration across the store is certainly another big advantage of EDGEPoS for Joanne.

“Yes, our Daily Deli Scales are integrated using Mettler Toledo Touch Screen Scales. This gives us full visibility on reporting, margins, profit and stock. And receipt resolution has seen a decrease in fraud.”

Joanne feels that there really are so many ways that EDGEPoS helps her and her staff every day that it’s almost impossible to describe them. But the great thing is that the practical results are there to see.

“The positive results are all around us. Take instore coupons as an example. These campaigns are now very easy to both run and manage using EDGEPoS.

“A recent example was when we offered customers 10% of their spend off their next spend. This naturally promoted an increased basket spend on their next visit. And using EDGEPoS Reports we know the precise volume of activity and that the majority of coupons were redeemed,” said Joanne.

Another feature of the Carrowdore store that has pleased Joanne is the increase in the use of the Azpiral staff loyalty scheme.

“There has been a huge increase in staff usage and staff spend since the Staff Discount Scheme was introduced,” said Joanne. “Internally, there is a Value Awards scheme introduced for all staff – for winners there is a £10 reward loaded onto their Loyalty Card. This is a huge incentive for staff to hit targets. So it’s been brilliant all round.”

All in all, extremely positive results from Carrowdore – results, indeed, that point to the power of teamwork and technology being the winning formula for the future.