Located in Ballymoney, Smyth’s EUROSPAR is a successful family ran business owned by David & Margaret Smyth,  son Samuel and daughter Debbie. The award winning, “Grocer of the Year” store has been subject to many changes over the years, increasing in size from 700sqft to over 7,000sqft with the total ground size of 10,000sqft. The Smyth family have introduced many additions to the store, including an increase in staff from five people in 1978 to 68 in 2019, a post office, butchery and car park.  David has been involved with the business for 41 years, with son Samuel coming in over 25 years ago. 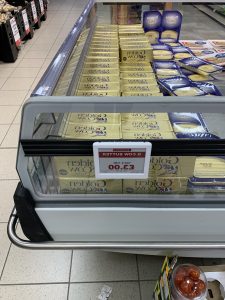 When Samuel visited a retail show in Norway and saw the ESELs there, he immediately knew that they would be a great asset to his EUROSPAR in Northern Ireland.

“I saw the benefits straight away when I looked at the ESELs at the Norwegian show, and spoke to Henderson Technology about the possibility to introducing an ESEL solution, integrated with the EDGEPoS system.”

“My father & I visited London with Gillian Kelly in 2018, and that’s where the journey began.  After looking at various ESEL solutions, the decision was made to go with Solu M, and by May 2019 Henderson Technology were ready to install the ESELs onsite.”

DID THEY MAKE THE RIGHT DECISION?

“Yes”, Samuel tells us.  “We have a promotion changeover every three weeks.  This used to take us a total of two working days to complete all stock and SEL swop outs.  This now takes 15 minutes.”  Amazing!

“On average we save around 20 staff hours per week.  These staff are utilised more effectively instore, with seven tills to man – this resource is invaluable.”

The ESELs have been a huge success.  Not only have they saved me the man hours above, we are now noticing a 1% margin increase every three weeks.  If you take this over five years, the ESELs will have paid for themselves.”

We have worked out on average we will save £1,500 per year on paper SELs and paper / ink for printing out POS signage.”

“Our customers love them.  The feedback is that they’re clearer to read.  And since we had the ESELs installed, it has cut down on the amount of customer complaints instore.  It has cut wrong pricing down on products to zero.”

“One of the biggest differences I have noticed is the change in the staff attitude to promotion changes.  They actually look forward to them now.  The extra time allows us to focus on our stock and it has actually allowed us to change how we operate in certain areas, with the implementation of suggested ordering across the store.”

“Overall, the ESELs just work.  That’s as simple as it is.” 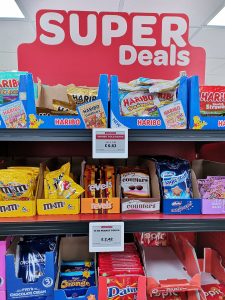