Results: Full control of all sites with plans to grow in the future with the help of EDGEPoS

SPAR Loughbrickland, located between Banbridge and Newry in County Down, was purpose built and opened in June 2017.  Owned by the Beckett brothers, Aaron and Dale, and part of Manor Retail Group; these brothers; both still in their early 30s, really are entrepreneurs in the forecourt and convenience field.

The brothers claim they received their strong work ethic from their farming background. Dale left school and started an apprenticeship in Joinery and Aaron in computers. Aaron and Dale both knew these were not the careers they would follow forever.

In 2010, the brothers started Beckett Fuels and claim this was the start of their entrepreneurial journey. Having to require seven different licenses and having to prove to HMRC the need for the business also.  But with two oil tankers on the road, and with the drive and ambition that Aaron and Dale are renowned for, they quickly made a success of the business.  So much so that Solo Petroleum backed the brothers and gave them their first break into the Forecourt business when Ballyrobert came up for sale.  After proving their worth to the Henderson Group also for the convenience side of the business, they are now a forward thinking duo with four fuel sites to boast of under their belt. 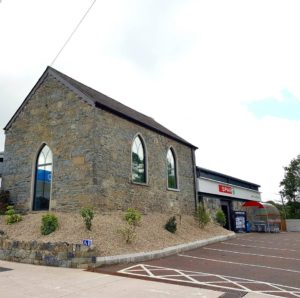 Aaron and Dale are huge avocators of EDGEPoS within their four sites.  Dale told us,

“When we were approached to purchase our second and third sites in Lisbane and Glenarm Road, they had third party EPOS systems in, and we knew that we could not work with these systems.  Once both sites were rebranded under the Henderson Group, we removed the third party systems and had EDGEPoS installed.  What a difference this made to the daily running of the businesses.”

“Having the Fuel Enabler PC installed in all sites made a world of difference.  With the old fuel box, the Fuel Cards were not integrated and we could not monitor fuel bunkering.  Without EDGEPoS we were left totally open to theft within the businesses.”

EDGEPoS prides itself on three main areas of running a business.  When asked about these, the brothers commented,

“Everything is well laid out on the EDGEPoS Till.  The PLU buttons are self -populating, even down to the Household Fuel buttons and ice cream.  When a customer purchases two bags of coal, there is an automatic upsell trigger message which appears for the cashier to remind the customer to purchase one more bag and receive a discount.  This is perfect to making our customers feel like they are getting a good deal, whilst also upselling on these products.”

The security within EDGEPoS is also essential for running the Manor Group forecourts.  Just this week, two counterfeit £20.00 notes were taken into one of the sites.  With the DVR viewer and CCTV integration into the EDGEPoS Transaction Journal, Aaron and Dale were able to view the transaction where the £20.00 notes were handed to the cashier.  Genius!

Furthermore, Aaron uses the word ‘Amazing’ when asked about EDGEPoS Reports.  And with the recent development added to EDGEPoS for the upcoming ’12 Deals of Christmas’ offers, they will be able to not only limit the amount of purchases to one customer, but have full visibility on how these deals work for each individual site.

Aaron and Dale both having young families are overwhelmed with support they have receIved from family, friends and their local communities. They added,

”We are extremely proud to have our mother and sister in leading roles within our business and the fact that we employ 50 local people, in truth, our stores thrive because we have great staff”.

Aaron’s fiancee, Ann, also leading a team of six within their ‘Daily Deli’ concept in their new store.

Dale and his fiancee, Nikita, were expecting a baby boy at the same time as store number four was due to open.  Undeterred, purpose built SPAR Loughbrickland opened not long after the new arrival leading to double celebrations.

And within the local communities of the stores, Loughbrickland has shone brightly in their list of charity and community achievements.  They have raised money for five defibrillators in total, three of these in Loughbrickland, and two of which have been donated to local primary schools.

”We have recently teamed up with local charity, Banbridge Action Cancer and have turned our shop front pink for the month of October to raise awareness, fundraise and promote the local event ‘Paint The Town Pink’ for Action Cancer”. 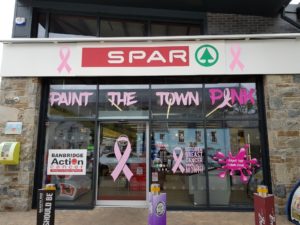 With the location of SPAR Loughbrickland close to the Southern border, it is essential that the site is able to offer both Sterling and Euro currencies.  Their advertising of this on the main A1 carriageway pulls in customers from the North and the South.  And with Loughbrickland being one of the first independent sites in Northern Ireland to adopt the Daily Deli brand of Hot Food instore, and their Barista Bar offering, this site really is a pit stop for weary travellers.

Adding to their services instore, SPAR Loughbrickland were the first Fuel site to offer EDGEPoS Self-Checkout, just another example of the forward thinking attitudes of these brothers.  Dale commented,

“Reacting to the trends of our shoppers, we saw the advantages immediately of adding Self-Checkout to one of our tills.  Our rush of school children mainly pay by Apple Watch or Smart Phone, Self-Checkout has eliminated the queues onsite at this time.”

“Our customers still have the option of being served by a cashier, in fact we employed three more local staff in the same week that we launched our Self-Checkout.  We are able to provide both experiences to our customers, and EDGEPoS Self-Checkout enhances the unique and modern feel of our busy store.”

With 5% of all store transactions going through Self-Checkout in the first seven days of install onsite, Aaron and Dale are confident that this will quickly grow to the aim of 13% soon.

Their ambitious plans for the future include concessions and further growth in current stores.  And with the help of The Henderson Group, acquire more stores in the near future to include a EUROSPAR.  They also intend to install EDGEPoS Head Office over the next 12 months to help them manage all of their sites from their own head office; and have plans for more Self-Checkout lanes across their sites.

With the Beckett family’s display of loyalty to both Solo Petroleum and the Henderson Group, the future looks bright for these young, ambitious brothers.  EDGEPoS will always be onsite to run their businesses and we can’t wait to see what they achieve in the future.